SOFIA ROCKS 2012 reverted to the two-day form of the festival and the location where it was first held – the Vassil Levski National Stadium. The big headliner of the event were Guns N' Roses, with their first ever concert in Bulgaria. They went on stage on July 8 not only without Axl Rose's usual delay, but even a bit earlier than the scheduled starting time. Before them the audience was entertained by Brit rock stars Kaiser Chiefs, Dutch symphonic metal sensation Within Temptation and reunited 90's rock icons Ugly Kid Joe.

Unfortunately the main act of the first day of SOFIA ROCKS 2012 – Godsmack – had to cancel its appearance due to an illness of frontman Sully Erna, so the headliner's place was taken by Trivium. Their incredible performance was as inspired as can be, turning into an unforgettable moment for both band and fans.

The first day of the festival featured also Sweet Savage (Ireland), Scar Symmetry (Sweden), Heaven Shall Burn (Germany) and rap-metal inventors Clawfinger from Stockholm. All but the last-mentioned group debuted in front of the Bulgarian audience at SOFIA ROCKS 2012. 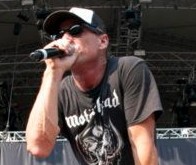